There are four major infectious diseases seen in pet rabbits. Two serious diseases caused by viruses rarely seen in indoor pets, are myxomatosis and viral hemorrhagic disease. Because they are viral diseases, there are no effective treatments once the rabbit is infected. Two other infectious diseases of rabbits are encephalitozoonosis (a neurologic disease caused by the parasite Encephalitozoan cuniculi) and respiratory infection caused by the bacteria Pasteurella multocida. These are common in indoor pet rabbits. 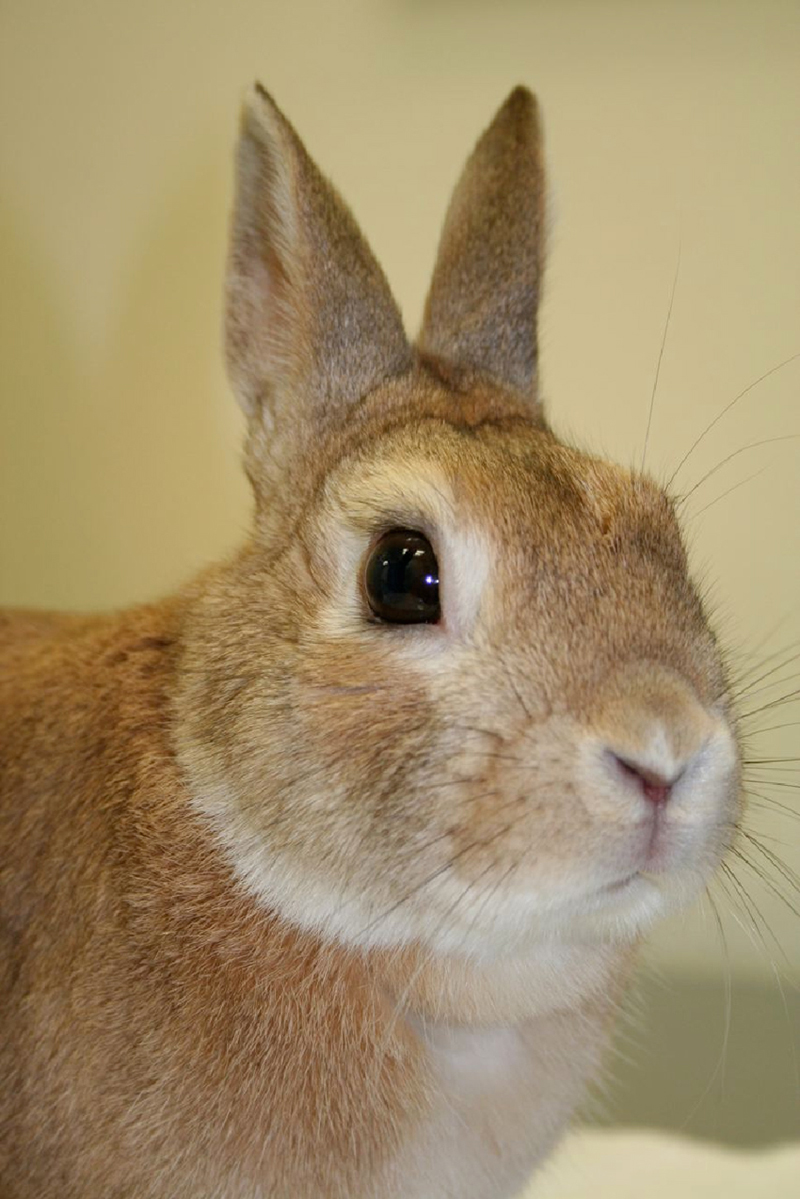 This illness is caused by the myxoma virus, which is widely distributed in the wild rabbit population. Even if your rabbit never comes into direct contact with animals from the wild, it can still become infected with this disease, because the virus is spread by bites from mosquitoes, flies, fur mites, and fleas. It is also acquired from injuries caused by contaminated thorns or thistles, or by direct contact with an infected rabbit. It is found in North America (primarily California), South America, Europe, and Australia. Pet rabbits are more susceptible and more severely affected than wild rabbits, as wild rabbits have developed a better genetic resistance. Clearly, outdoor rabbits are at greater risk of getting this disease.

The incubation period is 1-3 days, and the first signs are development of puffy eyelids, a purulent (pus- producing) conjunctivitis, and lethargy. Subcutaneous (under the skin) swelling extends around the eyes, ears, and genital region. Swelling can rapidly progress to skin hemorrhages, trouble breathing, decreased to no appetite, fever, and development of generalized skin tumors. Death is usually within 1-2 weeks after infection, but occasionally animals survive, and signs will slowly regress over about 3 months. Rabbits showing signs of myxomatosis should be seen by a veterinarian as soon as possible. Treatment involves supportive care with fluids, syringe feeding, anti-inflammatory drugs, and pain relievers.

"Myxomatosis virus is spread by bites from mosquitoes, flies, fur mites, and fleas."

Vaccination may provide temporary protection. This vaccine is not available in some countries. Pregnant animals should not be vaccinated, nor should rabbits less than six weeks old. Occasionally vaccinated rabbits have a local reaction at the injection site, but compared with the lethal infection, this reaction is insignificant.

Also called rabbit calicivirus (RCV), rabbit hemorrhagic disease (RHD), and viral hemorrhagic disease (VHD), this highly contagious disease was first recognized in China in 1984 but now has an almost worldwide distribution. Viral hemorrhagic disease is caused by a calicivirus and, although the incubation period is up to three days, animals may die suddenly without any clinical signs. The disease is transmitted by direct contact with infected rabbits, rabbit products, rodents, and contaminated cages, dishes, and clothing. The virus can also transmit over short distances in moist air. Rabbits in close proximity to other rabbits (such as at breeders and rabbit shows) are at a greater risk. Rabbits that recover can become carriers of the virus and may shed virus up to 4 weeks.

If there are signs of infection, they include decreased to no appetite, fever, lethargy, and collapse. There may be convulsions and coma, difficulty breathing, foaming at the mouth, or bloody nasal discharge. Some animals survive this acute phase but die a few weeks later from liver failure.

"Animals with this highly contagious disease may die suddenly without any clinical signs."

Given the horrendous death experienced by affected rabbits, pet rabbits in areas where this disease is rampant should be vaccinated annually (or even as often as every six months). Vaccines are not available in every country; they will not eradicate the disease but may reduce the number of deaths. Speak to your veterinarian about vaccine availability in your area and the risks and benefits of its use. New rabbits should be isolated from other rabbits for 30 days to minimize the risk of this infection.

Encephalitozoon cuniculi is a microscopic parasitic organism that has to live within a cell to survive. It can affect rabbits, mice, hamsters, dogs, cats, guinea pigs, and humans.  It is spread in rabbits from mother to offspring in the uterus and from rabbit to rabbit through infected urine.

It usually causes a latent condition in rabbits, so that many infected rabbits show no signs. When signs develop, the affected rabbit may develop dense white cataracts in one or both eyes, a head tilt, or more severe signs, such as twitching eyes (nystagmus), lack of appetite, difficulty walking, uncontrollable rolling over in one direction, tremors, and seizures.

Treatment involves administration of anti-inflammatory and anti-parasitic drugs for several weeks, along with supportive care such as syringe feeding and motion sickness medication. There are currently no medications that are guaranteed to clear the infection, and many rabbits continue to show signs even after treatment.

"Rabbits with encephalitozoonosis may develop dense white cataracts in one or both eyes, a head tilt, or more severe signs, such as twitching eyes (nystagmus), lack of appetite, difficulty walking, uncontrollable rolling over in one direction, tremors, and seizures."

Encephalitozoonosis has been described in a few cases in people, but its significance is poorly understood. Very young, elderly, and immunocompromised people are most at risk. Individuals with poorly functioning immune systems likely should not be around infected rabbits. 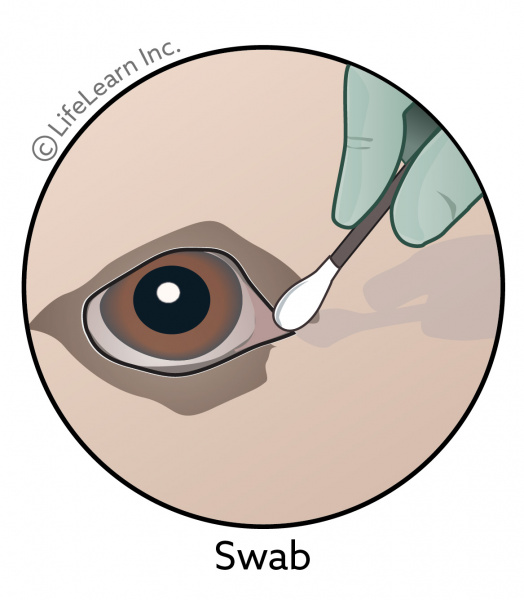 Pasteurella multocida is bacteria that commonly causes abscesses, respiratory infections, and chronic inflammatory disease in rabbits. It can infect the nasolacrimal (tear) ducts, eyes, ears, and nose, and can cause abscesses of tooth roots, bones (particularly the jaw), skin, tissues under the skin, and internal organs. This organism commonly causes an upper respiratory tract infection often called snuffles which frequently occurs in young rabbits.

Many cases of snuffles are mild, involving slight ocular or nasal discharge and sneezing and, if caught early, can be effectively treated or managed. If left untreated, this infection can progress to become severe, chronic, and potentially fatal. A swab for bacterial culture and antibiotic sensitivity testing can be taken of ocular or nasal discharge to help guide treatment. Treatment usually involves either oral or injectable antibiotics, given for a minimum of 2-4 weeks. In some cases, treatment can be required for months depending on the response to therapy.

Certain oral antibiotics, especially oral penicillin and similar drugs, can be fatal to rabbits. These antibiotics upset the normal gastrointestinal bacteria, leading to overgrowth of toxin-producing bacteria, diarrhea, dehydration, and death and should never be used in rabbits. There are safe oral and injectable antibiotics prescribed by veterinarians to treat this infection in rabbits, but none is leads to a definitive cure. Eye drops and nose drops, as well as oral anti-inflammatory drugs, may be used in conjunction with other antibiotics, as prescribed your veterinarian.

"Pasteurella multocida can infect the tear ducts, eyes, ears, and nose, and can cause abscesses of tooth roots, bones, skin, tissues under the skin, and internal organs."

Rabbits with abscesses in or under the skin, in the jaw, or in an internal organ often require surgery to remove the abscess. Abscesses in the middle ear (causing balance problems), eyeball (causing blindness) or in bones or major organs or often difficult to treat and may recur, even with surgery.

All rabbits carry Pasteurella organisms, but only some rabbits will manifest disease (their immune systems generally keep the organisms in check). Stresses such as poor nutrition, change in diet, introduction of a new pet or person in the house, overcrowding, environmental stresses, immunosuppression, or the presence of other disease, may trigger clinical signs. Many rabbits are chronically infected. The disease is easily transmitted between rabbits through direct contact with infected rabbits’ nasal or ocular discharge, contact with pus from an abscess, or contaminated items such as bedding and food and water bowls. New rabbits should be isolated (for about one month) before being introduced to existing pets. Even with successful medical or surgical treatment, relapses may occur if your rabbit is exposed to stressful situations. Be sure to have your rabbit checked annually by a veterinarian to keep him as healthy as possible to minimize problems with pasteurellosis.

This client information sheet is based on material written by: Laurie Hess, DVM; Rick Axelson, DVM

© Copyright 2019 LifeLearn Inc. Used and/or modified with permission under license.