What are the most common skin problems? 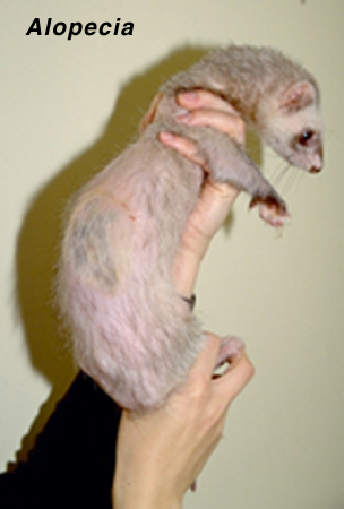 Many skin diseases in ferrets are associated with parasites - fleas, mites, and ticks. Ferrets may also develop bacterial skin disease if the skin is traumatized, and they are susceptible to skin tumors such as mast cell tumors and squamous cell carcinoma. Canine distemper infection can cause skin lesions in ferrets, including a red rash which typically starts on the chin and lips and spreads to the nose, eyelids, and groin; further information on distemper in ferrets can be found in the handout "Respiratory Diseases in Ferrets".

Since skin symptoms may be a symptom of a more serious, generalized condition, your ferret should have a thorough physical examination by a veterinarian familiar with ferrets if it has any skin lesions.

What causes ferrets to have an unpleasant smell?

Ferrets normally have a characteristic musky skin odor that some people consider unpleasant. This odor arises from sebaceous glands that are widely dispersed over the skin and that may cause the fur to have a greasy feel. Male ferrets often have a more pronounced skin odor. Neutering (castration) reduces the odor but does not eliminate it completely. Monthly bathing with a ferret shampoo may also be helpful in reducing the musky scent.

"Ferrets have a characteristic musky skin odor from sebaceous glands that are widely dispersed over the skin."

Adrenal Gland Disease. Many ferrets develop benign and malignant tumors of one or both adrenal glands. These tumors occur in both males and females, and the sex steroid hormones that these tumors produce have several effects on the skin. Ferrets with adrenal gland disease lose hair, have itchy skin, and often develop small pimples or blackheads. To reduce these signs, veterinarians can suppress hormone secretion from the diseased adrenal gland(s) with monthly injections of synthetic hormone, such as leuprolide acetate (brand name Lupron®) or with hormone implants, such as deslorelin, placed beneath the skin every few months. Diseased adrenal glands also may be removed surgically. Any ferret with signs of adrenal disease should be examined by a veterinarian as soon as possible.

"Using the same amount of flea powder or spray as for a cat or small dog may lead to the ferret’s absorbing toxic levels of drug."

Fleas can be killed with the standard flea control measures used in cats and dogs, but ferret’s smaller size means that ferrets require a substantially smaller dose; using the same amount of flea powder or spray on a ferret as for a cat or small dog may lead to the ferret’s absorbing toxic levels of drug. Prior to using any pesticide or chemical on or around your ferret, check with your veterinarian. Avoid using organophosphate flea medications in ferrets, since the safety of these pesticides have not been determined in this species. Various topical veterinary medications (such as Program®, Revolution®, Frontline® and Advantage®) have been used successfully in ferrets, but only Advantage® has been specifically tested for safety in ferrets. It is important to treat the environment for fleas, as well as the pet.

Ear mites. Ear mites are common in pet ferrets. Otodectes cynotis, the same ear mite that affects dogs and cats, causes itching, headshaking, and ear scratching in ferrets. These mites produce a large amount of dark or black waxy discharge (versus the smaller amount of light-colored earwax normally seen in ferret ears that can be gently cleaned away with a moist cotton ball). In severe cases, excessive and severe scratching produces scratches, scrapes, and crusty scabs inside the ear canal and around the external ear. Mites can be idenitfied by analyzing ear discharge under the microscope.

Ear mites can be treated successfully by a veterinarian with an ivermectin drug injected under the skin every two weeks, with selamectin (Revolution®) applied once a month topically to the skin, or with a prescription ear medication applied inside the ears daily until the signs resolve. All animals in contact with the affected ferret will require treatment, even if no ear mites are found on them, as they may be carriers of mites. Topical ear medication or oral nonsteroidal anti-inflammatory drugs may be used to treat the secondary inflammation and may offer relief from the itching until the anti-parasitic medication has killed all the mites.

Sarcoptic mange. Sarcoptic mange, or scabies, is occasionally seen in ferrets; it can affect either just the feet or the whole body in a more generalized manner. In the localized (feet) form of the disease, severe inflammation and itchiness occurs with swollen, crusted paws; left untreated, in extreme cases, the infestation can damage the skin and tissues of the feet to the point that the toenails or even the whole foot can be lost. Treatment with injectable ivermectin or topical selamectin, together with topical and/or systemic (oral or injectable) antibiotics, is typically curative in both the localized and the more generalized form. All animals in contact with the affected ferret will require treatment, as scabies is very contagious from pet to pet and is also transmittable to people.

Ticks. As is the case with fleas, ticks can occur on ferrets that play or are housed outdoors. Ticks look like small brown, black, or red spots that when engorged with blood, become spherical and raised. Ticks can cause anemia and can transmit several infectious diseases. Contact your veterinarian for a safe treatment if your ferret is afflicted with ticks. 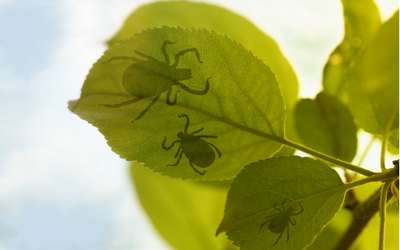 Bacterial Disease. Bacteria readily infect bites and scratches acquired from trauma or during fights, in juvenile play. In most cases, if the ferret has a healthy immune system, it can combat the infection on its own, but in severe cases, topical or systemic antibiotics are required.

Viral Disease. Canine distemper can cause skin lesions around the muzzle and on the footpads. The skin of the chin, lips, and eyelids becomes very swollen, and the foot pads become crusty and thickened (a condition called ’hard pad’). This disease is fatal in ferrets and preventable with routine, annual vaccination. Further information about this deadly disease can be found in the information handout "Respiratory Diseases in Ferrets".

Fungal Disease. Fungal disease is uncommon in ferrets, but one fungal infection reported in ferrets is ringworm (which is a fungus, not a parasitic worm). Ringworm presents as well-defined areas of hair loss, dry flaky skin, and inflammation. The skin can become thick, red, and crusty. Some cases are self-limiting (will resolve on their own) but all should be investigated and treated by a veterinarian, as this condition is contagious to other pets and to people. The environment, as well as the affected pets, must be treated to eliminate the infection.

Skin Tumors. Most of the skin tumors that ferrets develop are benign. Mast cell tumors are the most common, followed by basal cell tumors and sebaceous cell tumors. Mast cell tumors look like crusty, raised scabs that are commonly itchy. They can appear anywhere on the ferret’s body and often fall off and recur. In some cases, skin tumors are malignant and aggressive. Diagnosis of the type of tumor is made by your veterinarian either through microscopic analysis of material obtained by a fine needle aspirate of the mass or by removal and biopsy of the mass under general anesthesia. Malignant or large, rapidly growing benign tumors should be removed as completely as possible to try to prevent recurrence.

This client information sheet is based on material written by: Laurie Hess, DVM; Rick Axelson, DVM

© Copyright 2019 LifeLearn Inc. Used and/or modified with permission under license.